With 2.5.x clients can connect via web sockets to the server. Setup should be easy. Instead of “Internet server name/IP” of e.g. “example.com” use “ws://example.com:55414/socket”. The real advantage comes into play if a real web server with SSL is setup in front. Either proxy the whole page, or serve the files and only proxy “/x” via FastCGI (see manual), additionally proxy “/socket” via web socket to “ws://127.0.0.1:55414/socket”. Then setup the clients to connect to “Internet server name” “wss://example.com/socket”. Basic authentication, a different name and a different port should also work, e.g. “wss://username:password@example.com/socket”.

Come back of macOS client

A test version of the macOS client is here. Please add your feedback!

2.5.x can backup Linux clients (via dattobd or Linux device mapper snapshots). The use case is e.g. backing up a DigitalOcean instance. It is explicitly not to create image backups of all possible configurations e.g. LVM, mdraid, btrfs, …
It can “live restore” a root volume, i.e., overwrite the root volume of a currently running machine. So one can image backup e.g. a DigitalOcean droplet. To restore create a new instance (tested with Debian 10/buster) then run the restore script which overwrites the current instance with the backed up instance using a trick to put the currently running system files into (compressed) memory.
Dattobd and the Linux device mapper supports Changed Block Tracking (CBT), so image (and file) backups are done with CBT.

Could you narrow it down please? 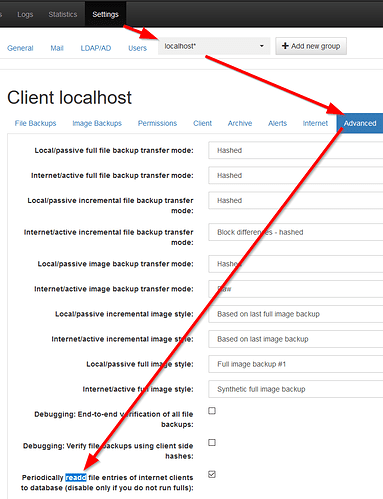 So i updated and the backup were running in a loop like previousely (maybe one every 5 minutes).
Tried to resave all the client settings and the client crashed.

Weird, I removed that debug message in the last client version (2.5.9)

it seems it s still there, i tried to run in gdb , i get a raise.c: No such file or directory, not sure you can still get the infos you need ou of it.

Thanks. Maybe it helps if you run catch throw in gdb before run?

Did you configure multiple parallel hash threads? I haven’t tested this at all – just wanted to know if it still works with one of them. But I guess now I also know it doesn’t work with multiple (as expected).