Urbackup client works on WiFi but not working on Ethernet

WiFi and Ethernet is in the same network. Firewall on laptop disabled.
Any ideas what’s wrong ?

This screenshot from client connected via WiFi 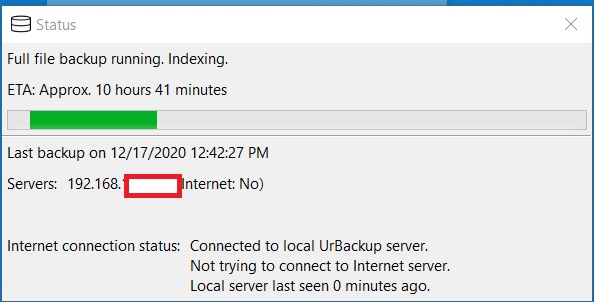 Many things possible. Here are some thing you can check. Did you disable wifi when connected to ethernet? Check if ipv6 enabled on ethernet (suggest disable). do a netstat -nr at a command prompt and check the routing table.

Did you disable wifi when connected to ethernet?

do a netstat -nr at a command prompt and check the routing table.

I don’t think that problem is in routing table. Because other services works on both connections.

I don’t know which interface would use UrBackup client if PC has 2 interfaces at same network (as wifi and ethernet). I didn’t see any information about it at the documentation. May be @uroni write answer about it.

Probably your wireless interface gets this broadcast first and answers first.

Try to:
Disable your wireless device at device manager. After it your OS will see only one ethernet interface.
Disable FW.
Reboot PC and check it again.
If UrBackup server will see this client you will know that problem not at the your ethernet interface.