Hello Everyone
I was trying to restore ISO image of ALL IN ONE Desktop (Lenovo, Dell). At the time of restoring shows these notifications: 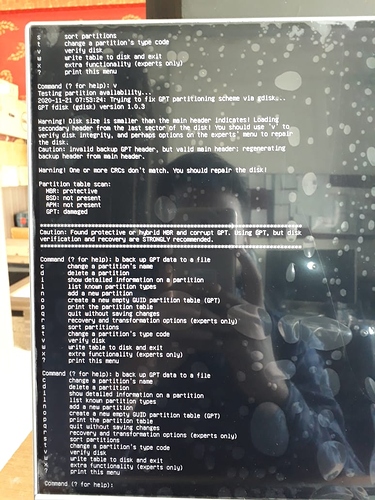 Is there any solution to overcome this problem please suggest all UrBackup users.

Are you trying to restore to a fresh disk? Or overwrite existing stuff?
First thing I’d try is booting Windows install media in repair mode & use diskpart to clean the disk from a command prompt, that way there won’t be any old boot record or GPT info left to posssibly confuse things.

Yes, I am trying to restore at fresh disk.

and after the process of diskpart still same problem occur.

Is it related to AIO (All in one) security??? or UrBackup is not capable to restore encrypted disk or on protected system???

It might be something to do with the strange partition layout these come with from the factory with a hidden partition containing a factory recovery image (including bloatware) which nobody ever uses.

UrBackup doesn’t image such partitions.
If the disk is indeed encrypted (hardware encryption?) you may want to find how to unlock that pre-boot in the UEFI/BIOS.

I’ve no idea if the command line restore sequence here would help.

I usually wipe such systems from the get go & install a default Windows system, resulting in a standard partition layout & backup/restore is likely to work afterwards using any normal software including UrBackup.

This topic was automatically closed 90 days after the last reply. New replies are no longer allowed.