I need to restore my workstation’s backup image using the live CD however it does not appear to detect my BIOS configured striped RAID array. Rather, it shows the two discreet disks visible on the controller.

Could the relevant driver be added to the restore CD to allow for common Motherboard configured RAID platforms such as Intel RAID.

It looks like debian calls this SataRaid - see article here

I have loved using your product and have already successfully restored other systems on my network. I had not forseen this problem on my main workstation and would like to avoid a complicated reinstall.

Hmm, you can edit the bootline with tab. But I don’t know if I installed the right packages so that it configures correctly. Did you manage to configure it from the command line?

​I got through to the command line but I an not very familiar with linux. I
was unclear as to how to ​mount the drives as fake raid at this point. I’d
be happy to try it out by following some instructions. If the restore cd
has the right packages/drivers would the bootloader detect the array
automatically and provide it as an install location?

As it happens I managed to restore the system state and clear the error I
was having using windows system restore so did not need to restore the
whole system image but I would like the facility to be able to in the
future. I like the low footprint of the backup client on my system and the
combination of image and file based backup but it is not much use to me if
given a total system failure, I couldn’t actually restore to the hardware
I’m backing up from.

Thanks again for you help and prompt response

Having fake raid / software raid restore available in URBackup restore would be huge. Currently we use URBackup for approx 10 machines that have a motherboard software RAID0 config. When restoring a machine I am unable to utilize the Linux restore client since the motherboard’s raid 0 logical drive is not expose.

This does not sound like software raid at all.

I may be getting my terminology wrong but in regards to a motherboard RAID 0 with this model ( http://www.asrock.com/mb/Intel/Fatal1ty%20X99M%20Killer/?cat=Specifications ), When utilizing the restore from the URBackup linux client the two SSDs appear as appear as separate 500GB drives. When running a restore with a windows installer the RAID drive appears as the correct 1TB logical drive.

Hmm, could you try adding dmraid=true to the kernel command line (tab or e on the boot screen, then edit, boot with F10, I think)?

No go on that front, I edited the kernel boot line, placing dmraid=true in a couple of places over a few different tries (inserted at red lines in attached image) all of which resulted in still only seeing the two SSD individual drives and not the RAID volume. 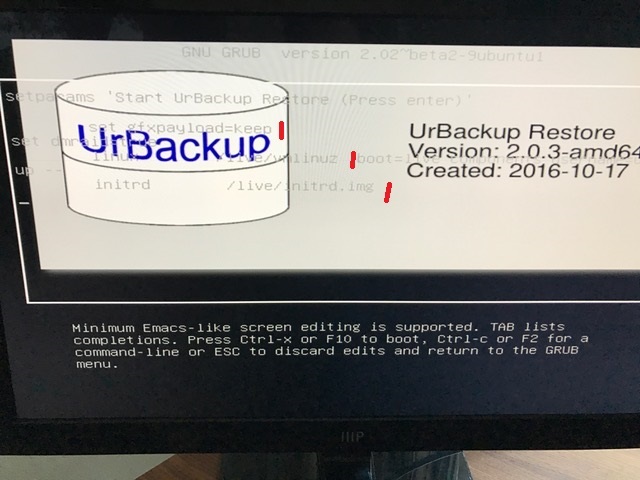 Hello,
did you manage to restore to radi successfully? I have similar problem with ASUS ZENBOOK UX51VZ with 2x256 GB disks in Raid (Intel).
I have managed to install dmraid package and in shell, when I run “parted -l”, I can see my partitions with correct numbers (in sections with “Model: Linux device-mapper”). But the wizard still sees only the physical disks. How to expose those partitions (the RAID volume) to the wizard, or, how to restore manually from shell.

Thank you very much for any help.

I have the similar same issue and have created a topic with the same issue because I was not able to find any post.

Is it possible that anyone found a solution or can help to get a solution with the issue to not restore to volume but only being able to restore to one of the Raid Disks?